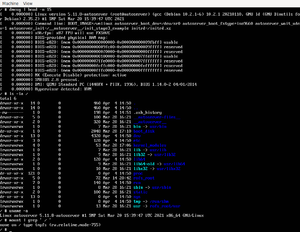 Autoserver is a GNU/Linux system that I made to support servers on various embedded systems and single-board computers. The project is designed with a few main goals in mind:

Autoserver and its container modules have been used on server systems, routers, embedded devices, virtual machines, and even simple client systems.

Source code for the Autoserver build system can be found at https://git2.peterjin.org/autoserver. The LICENSE file in the repository only applies to the scripts that make up the build system (i.e. files in the repo); the finished Autoserver product obviously has components that are licensed under other licenses (like the Linux kernel which is GPL licensed).

Autoserver only currently fully supports x86-64, but we are currently working on getting ARM and ARM64 devices to work too.

Autoserver, on the other hand, does none of that. Instead, we use a tmpfs as the root filesystem. To allow programs to still be stored on disk, we actually create symlinks to a squashfs mount containing all of our programs. The squashfs mount is actually a subdirectory of the tmpfs root, so that the filesystem containing all of the programs can be easily unmounted and replaced if needed to (e.g. if upgrading the system on-the-fly).

Upgrading the system on-the-fly by replacing the squashfs image with a new one is currently a work-in-progress. The current approach to do so would be (completely untested):

The fact that we swap the old root filesystem and replace it with the new one also precludes the use of e.g. systemd as the init system, as it would depend on the libraries present in the old root filesystem, and there are too many libraries to copy and cache into RAM. To mitigate against this, we actually wrote our own minimal init system, which only depends on the C library (libc.so.6 is small enough so that it can actually be copied into the tmpfs); alternatively, Busybox init could be used.

If you actually need to use systemd, you can run it in a container.