Note: A lot of the tricks described here are untested. Use at your own risk. If you know whether something works or not, please contact me. 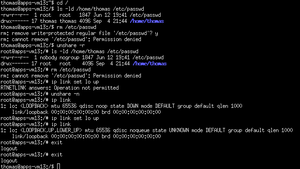 User namespaces allow you to perform actions that would otherwise be restricted to root, with the understanding that root access is only needed if it affects a resource that is used by something more privileged. Here, we create a new user namespace. We are unable to remove /etc/passwd (note the changes in file ownership), but we are still able to create a new network namespace along with it and bring up the loopback interface there. 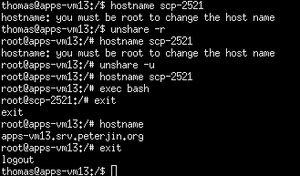 Non-root users are normally not allowed to change the host name. Creating a new user namespace, however, is still not sufficient, as the process's UTS namespace is still owned by the initial user namespace. Only when we actually unshare the UTS namespace within will we actually be able to change the hostname. Note that when we exit from the shell, the hostname reverts back to its original value.

If CLONE_NEWUSER is passed to unshare() or clone(), the new user namespace will be a child of the user namespace that the creating process had at that time.

For privileged operations (such as changing the hostname on a UTS namespace), capability checks will be made relative to the user namespace that is the owner of the non-user namespace.

Suppose we have the following:

Or with my ctrtool program (currently only supports numbers and not names):

For the purposes of the diagram above, "setuid root program" in a user namespace means an executable file with the set-uid bit set, and whose owner UID is whatever maps to UID 0 in that namespace. So for a user namespace with a UID map of "0 100000 65536", UID 100000 in the parent user namespace would be "root" in the child namespace.

[*] If the no_new_privs bit is set, then the "drop capabilities" step is irreversible.

There are several ways to block the creation of a new user namespace: 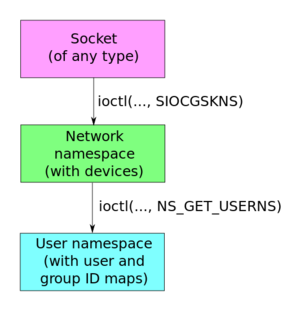 in a newly created network namespace and then open up a wildcard-bound socket in that same namespace to intercept connections to any and all IP addresses, provided that they were made in that network namespace. You can use getsockname() to obtain the original destination IP address. This might be useful for transparent proxying.

would fail to bind the socket because my_socket is still in the original network namespace at the time of the bind() call.

This may be useful because it can eliminate PID files since the daemon uses a known fixed PID. To terminate a daemon with a fixed PID, simply kill the fixed PID. No need to find it anymore in /proc. And if the daemon is already running, then step 4 will fail since the PID is already in use.

The magic number 300 is present here since PIDs wrap around from 32768 or 4194304 to that point. PIDs 2-299 will never be assigned as a result of PID reuse. It is not known whether if all the PIDs > 300 are used on the system, then the kernel will assign PIDs less than 300 to new processes; if you're paranoid, make sure that the number in /proc/sys/kernel/pid_max is at least 350 + the value in /proc/sys/kernel/threads-max, or use the PID cgroup controller.

This works best in a descendant PID namespace, since 2-299 in the initial PID namespace are already taken by kernel threads.