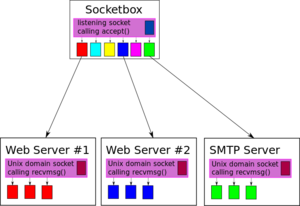 Remember that from the Notes about namespaces page, even though a process can only be in one network namespace, it can still hold sockets or other file descriptors obtained from other namespaces using a Unix domain socket. This allows containers to have a different addressing scheme than the server IP address endpoints. For example, on a network with both global and unique local IPv6 addresses, the containers could be addressed with global addresses, whereas the server sockets would be restricted to the unique local addresses.

Socketbox can be used to enable multiple instances of virtually any TCP-based protocol. Servers tested include HTTP/S (web) servers, IMAP, SMTP, and SSH. For IMAP and SMTP, both Implicit TLS and STARTTLS modes were tested successfully.

Socketbox is not a proxy server. Instead, it is more of an application router, which routes incoming connections to applications based on the destination IP address and port number, except that (unlike nginx, Traefik, or HAProxy) it works on the socket layer directly, which can improve performance in many cases.

In addition, Socketbox can only route requests based on IP addresses, port numbers, or any information that was already present during the TCP three-way handshake. Routing based on application-layer data, such as the Host header in HTTP, SNI for SSL, PROXY protocol headers, as well as SSL termination, is out of scope for Socketbox, and for those purposes, nginx and/or HAProxy should be used instead. Both of those applications could still be configured to receive sockets from Socketbox if desired (see Socketbox/Compatibility).

Socketbox started out because on one of my machines, I was running "throwaway boxes" in some Docker containers. Each container had a globally unique IPv6 address, an SSH server on that address and a persistent home directory, and they are called "throwaway" boxes because I could easily delete and recreate them if something bad happens.

ULAs were added to mitigate this problem, but (at that time, I did not know that you could have multiple prefixes in a Docker network|Docker does not allow more than one IPv6 prefix in a network.). But I still had the ULA static route set up, so what could I do? Well, I could use the AnyIP trick to make all of those addresses locally bound.

And so it was. Initially, I modified the SSH server to run in inetd mode, then set up an inetd-like daemon that instead of listening on a TCP socket, listened on a Unix domain socket. Then, with some experimentation, I discovered that if the "AnyIP" trick is used on a wildcard socket, then the server will accept any IP address within that subnet, and the original IP address out of that entire subnet can still be retrieved using the getsockname() syscall on the socket returned by accept() as part of a normal TCP server flow. Using this method, along with the "geo" module in nginx to match the server IP address, I set up a very interesting reverse proxy for the SSH servers.

But there were some limitations. First off, the client IP address was never recorded in the ssh logs. While this is not too important on a local network, it does, of course, have implications on the public Internet. Nginx also had to be used as a middleman, so performance was not that great.

So what could I do? Initially, I had a program that created a socket bound to a ULA in the host network namespace, and then forwarded any sockets returned by accept() to another program in a different network namespace using the SCM_RIGHTS control message. However, there were still some limitations:

And so socketbox basically extends upon this concept without the above limitations. By having a "socket dispatch" routine in userspace, we can basically have a single "universal" socket that accepts for multiple destination IP/port combinations, and then forward them throughout the system by applying rules on the destination IP address. In addition, we have a "socketbox-preload" utility that modifies virtually any TCP server program to work seamlessly with socketbox's dispatch routine, so the "inetd mode" restriction no longer exists for the most part.

Since then, the issue with the Docker network prefixes no longer exists because I've since moved on to custom container software, which offers much more flexibility as to the network configuration. However, the ideas of AnyIP (which now includes IPv6 Things) and inter-netns sockets were still strong, so socketbox still has its uses.

The original socketbox protocol (now known as the "A" protocol) was rather straightforward: listening daemons would, instead of calling bind() on TCP sockets, bind() on a Unix domain datagram socket instead, and instead of calling accept(), would receive connections through SCM_RIGHTS datagrams received directly from the bound Unix domain datagram socket.

This sounded good in theory, was simple to implement, and also had the advantage that bind() never blocked and accept() would never fail with a permanent error (reasons why this is important can be seen below). It also mapped cleanly with non-blocking servers with respect to poll/select/epoll. However, it did not work out very well in practice. For example, if I were to delegate the directories to untrusted containers, the following problems would result:

The reference implementation for a "B" protocol server can be found at https://git.peterjin.org/_/python-socketbox/. It is written in Python instead of C, as it was meant to run only on the host, where a Python runtime may more likely be found (the old "A" protocol preferred a hierarchical approach, with instances running in intermediate containers).

The reference implementation is still "pre-alpha", as it was just written less than 12 hours before this text was written. Things to do:

The terms "A protocol" and "B protocol" are arbitrary; these terms are not actually used in the socketbox code; they are here just to label and differentiate between the old ("A") and new ("B") protocols.

Use with ip6tables TPROXY

Socketbox supports ip6tables TPROXY as a means of allowing a single socket to listen on multiple addresses, thus eliminating the need to use poll() on multiple sockets.

As I understand it, what TPROXY appears to do is the following: For the purposes of socket demultiplexing and finding a listening socket, TPROXY overrides which address a daemon has to listen on to accept the connection[1]. For example, an incoming TCP SYN packet with destination IP/port [2001:db8::1]:80 would require that there be a listening socket on [::]:80 or [2001:db8::1]:80. If this SYN packet matched a TPROXY rule with --on-ip ::1 --on-port 80, then it would look for a listening socket on [::1]:80 instead. Multiple TCP/IP flows can be reduced to one listening address, thus allowing the socket to accept connections for any set of IPs or port numbers determined by iptables rules.

Socketbox must be configured to bind to [::ffff:127.100.100.1]:1 with IPV6_TRANSPARENT set in order for this to work. You must use the IPv6-mapped-IPv4 notation; an IPv4 socket, even with IP_TRANSPARENT set, will not work.

This works because the ::ffff:127.100.100.1 address can be interpreted from the perspective of the kernel as both an IPv6 and an IPv4 address.

This part used to have a guide where certain subdirectories of the socketbox root could be freely delegated to other containers using ACLs on the UID/GID maps. However, this method is now deprecated for two reasons:

There are a few ways to mitigate these vulnerabilities:

The previous text written for this section can be found by clicking on the "expand" button on the right.

Socketbox requires a directory of sockets created by end daemons that it can access. To ensure security of that directory, the author recommends that this procedure be followed:

We want to create two subdirectories in that root directory, one for each container: /run/socketbox/00001 and /run/socketbox/00002. Make the /run/socketbox directory mode 2755 with owner/group as root:socketbox-access. Make each of the 00001 and 00002 directories mode 2750 with owner/group root:socketbox-access, but also set an ACL such that the 00001 directory has read-write-execute privileges for UID 100000, and 00002 has read-write-execute for UID 101000.

This is the safest in terms of security, because:

Essentially, the set-group-ID bit on the directory is used here as a means for a process in a container to specify access for a GID that is not otherwise mapped in a container's user namespace, without forcing it into "other".

As a means of preventing leaks, the server network that is part of our home LAN is on a completely isolated network namespace[2] which is not connected in any way to the rest of the LAN. However, when accessing servers locally, it would theoretically need to take the full path of the Internet, which is very inefficient. Socketbox can be used to safely "bridge" these two namespaces together such that they stay isolated in terms of routing policy, but the servers in the other network namespace can also be accessed from the main network namespace without any tunneling overhead. The server IP address is different, so we use split-horizon DNS to ensure that this configuration remains fully transparent to clients in the LAN.

The effect of all this is pretty interesting, since it gives off the illusion that the addresses all correspond to their own host: