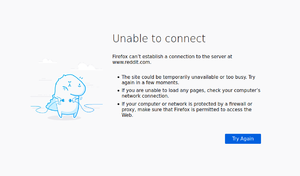 Artist's conception of Reddit when viewed from an IPv6-only network

It was freshman year in my college dorm room. The university's network was IPv4 only, yet I had a VPN "tunnel" on my laptop to my IPv6-enabled home network, so I was able to enjoy IPv6 connectivity at my university as well as at the nearby restaurants, even though the university only had IPv4 natively. I was able to silently impress my friends by showing sites like https://www.doesnotwork.eu/ and trying to get them to show the site on their devices, knowing that there would be an unexplained anomaly that would explain why it worked on my computer and not on theirs.

While I was at it, at one moment, IPv6 was working but IPv4 was not. I don't know how it came to be like that, but that was how it was. I could reach sites like Google and YouTube, as well as my own personal website (which has been IPv6 native for a long time), but the rest of the Internet, which still seems to be stuck on IPv4[1], was completely unreachable.

While most people think of this as a mere technical difficulty, I viewed this as, instead, first-hand experience of what it is like to only be able to browse the IPv6 internet. It's very limited, and you can only reach a small percentage of websites, but eventually, I would like to see it flourish and have it eventually replace IPv4. Sadly, right now, it's sort of, "incomplete", as one would say.

The VPN setup has since been torn down as of August 2020 for obvious reasons, but even then, if we ever come back to U of I after all this COVID-19 stuff stops, it will forever have IPv6.

peterjin.org would have never existed in its current form if it weren't for IPv6. The vast addressing freedom that comes from this new protocol, as well as a near-unlimited address space for every network and subnetwork that exists now and well into the future, means that you will never have to rival for something just because the inventors of it made a terrible design flaw (read: IPv4 was only 32 bits and does not have enough addresses for everyone in the world).