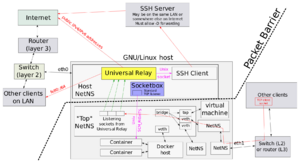 Universal Relay can be used as a gateway for an arbitrarily complex network topology, separated by a packet barrier.

In July and August 2020, I registered an ASN and provider independent IPv4 and IPv6 addresses at the American Registry for Internet Numbers. This was particularly useful for me, as it allowed me to realize many of the advantages that comes with having static, routed IPv6 prefixes, such as reverse DNS, the guaranteed ability to realize Snippets:Nginx geo local server address (required for things like IPv6 Things and Socketbox), and the ability to create a network with multiple downstream routers using static routes and/or prefix delegation.

However, what I did not like about this was that I had to spend a lot of money doing all of this. The ARIN fees already cost me over one thousand dollars. I also tried to sign up for various business Internet services, but either they did not serve my home (which was in a residential location, not a commercial one, due to COVID), or they were way too expensive for me as an individual. This was certainly not very nice if I wanted to talk about the advantages of IPv6 and allow others to realize those advantages too.

I had already set up a network using the BGP addresses at home using a VPN tunnel. This allowed me to use the BGP addresses directly on the network, but it was overall not very nice, simply because of inefficiencies with using the VPN tunnel in circumstances where the ISP addresses would already suffice, as well as potential privacy issues (due to the ARIN whois).

This caused a rather interesting dilemma: should I use BGP addresses, which has the advantage of being larger and static, at the expense of privacy issues and inefficiencies with using a VPN tunnel, or should I use the ISP addresses, which are more efficient to use, but are dynamic and smaller? To have the best of both worlds, I used IPv6 NAT on my main router to translate the static 2001:db8:XXXX::/48 addresses that I numbered my network with to the dynamic ISP addresses, using the ip6tables NETMAP target described in Linux Networking Primitives.

Eventually, I considered switching to the other ISP I had in my area, which did not have IPv6 the last time I used it several years before this consideration. This was very problematic since that would effectively nullify any advantage that I previously had with using IPv6 addresses on my home network. I was not willing to use my BGP addresses in such a situation.

This ultimately meant that in order for a network with IPv6 enabled to be sustainable, I had to have an IPv6-enabled ISP. Changing ISPs would therefore be a much bigger ordeal compared to the average consumer since IPv6-only subnets on my network would have to go back to having IPv4 addresses, which ends up creating a bottleneck from the address space being very small compared to IPv6. This was certainly not acceptable for me, as doing so severely limited the ability to have IPv6-only subnets.

You might be wondering, "why not just use a Hurricane Electric tunnel?" Well, there are people on the Internet with complaints about those tunnels, such as Netflix being blocked, peering issues with Cogent, not being compatible with CGNAT, the reputation of the addresses being less favorable compared to ISP addresses, and no longer offering free BGP tunnels.

These issues, especially the address reputation issue, ultimately led me to the big problem of wanting to have an IPv6 network with an ISP that does not have IPv6, but I cannot use tunnel or VPN services.

And so Universal Relay was created to realize the advantages of IPv6 without requiring anything other than your normal IPv4-only, dual-stack, or IPv6-only Internet connection. If you only have IPv4, then it won't grant you access to IPv6-only sites (no software can do that, and Universal Relay is not intended to change that), but if you do switch to an ISP which has IPv6, then Universal Relay can make the most out of it, and if you switch back to an IPv4-only ISP, then you can still sustain the IPv6-only private side network.

There were a number of other circumstances that also led to the creation of Universal Relay, such as

In addition to the above, I remember having written an old text document which had address and subnet mappings to effectively "partition" the IPv6 address space. The text below is not exactly the contents of that text document, but is very similar in spirit:

Summary: Registered IPv4/IPv6 space and ASN with RIR. Initially used it to support home network. Unfortunately, not sustainable in the long run, so switched back to ISP addresses with IPv6 NAT workaround. Workaround fell apart as I contemplated switching ISPs. Tunnels were found problematic too. Created Universal Relay as a consequence of realizing those issues.

Functionality deemed "out of scope"

This article or section needs to be updated.
Describe the mode of operation of the fake DNS server, and how it allows us to recover the original domain name, as well as the Internet and ISP-independent properties of Universal Relay's private side.

Universal Relay is a simple TCP->TCP relay for (isolated) network namespaces. It supports a variety of modes of operation, such as tunneling all traffic through a SOCKS server, as well as custom routing of network destinations.

Universal Relay was originally intended to be a means of causing all network traffic in a network namespace to be tunneled through a SOCKS proxy (such as the one created by ssh -D). Similar in overall spirit to slirp4netns, but instead of creating a TUN device and using a userspace TCP/IP stack, we reuse the kernel's TCP/IP stack using the following redirection in the newly created network namespace:

and use ctrtool ns_open_file to create listening sockets in the network namespace.

TCP/IP connections are read from the namespace's listening sockets; when a new connection is made, the destination is read (using the same technique as previously used in IPv6 Things and Socketbox) and translated into SOCKS5 CONNECT commands on the host.

Unlike slirp4netns, Universal Relay specifically accounts for the fact that there might be a whole network that it should be applied to, so you can create subnets, static routes, and even BGP sessions in that network namespace to other network namespaces to make all your VMs and (rootless) Docker containers use it, for example. It's also a very effective way to experiment with various routing protocols (BGP, OSPF, RIP, etc.) using network namespaces. Unlike a traditional address translator, this is possible even if the IP addresses conflict with the host network.

Also intended to be a NAT64 CLAT / PLAT by rewriting IPv4 destinations into their IPv6 equivalent with NAT64 prefix, or vice versa. Quite difficult to do on the layer 3, but rather trivial on the application layer. Unix domain socket destinations will also be supported.

Also intended to be used in conjunction with a protocol that will be developed for use with Socket Enhancer, to take "transparent proxying" off the latter's to do list.

Also intended to be a more flexible and general-purpose version of Snippets:Node.js NAT64 TCP relay, inet-relay, and socketbox-relay.

TCP port forwarding as implemented in slirp4netns will not be supported in Universal Relay itself due to fundamental complexities, as Node.js would need to be able to create sockets in multiple network namespaces (which it doesn't really support). Instead, the recommended solution is to use ctrtool ns_open_file or socketbox to create a listening socket in the host network namespace, then use HAProxy (or a similar tool) in the foreign network namespace with bind fd@${CTRTOOL_NS_OPEN_FILE_FD_n} (if using ctrtool ns_open_file) or bind sockpair@${CTRTOOL_NS_OPEN_FILE_FD_n} (if using Socketbox) in a frontend to relay data from the host network namespace over to the foreign namespace.

The name "Universal Relay" comes from the fact that it is technically a socket relay (similar to socat); the term "universal" refers to the fact that it can handle relaying for the entire Internet, or "universe", unlike socat which can only handle one IP address and port, which makes socat useful only for relaying a single service. Universal Relay is not a Tor relay (though it can be used in conjunction with Tor's SOCKS server).

Universal Relay has a fake DNS server that dynamically maps domain names to "phantom" IP addresses. This allows us to implement features like transparent Happy Eyeballs, since the transport medium is now independent of the actual IP addresses on the Internet.

With the fake DNS server, it is normal that all "public" IP addresses used on the Internet are unroutable on the private-side network.

With the "transparent_server" enabled, Universal Relay is technically still a NAT device, since it "collapses" a series of private IP addresses into a single IPv4 and IPv6 address, though it still strives to be a much better version of e.g. the NAT in iptables. For example, instead of sending the network traffic directly out into the outbound/WAN interface, it can arbitrarily rewrite network destinations to other places of choosing, such as through a SOCKS server or a Unix domain socket, or a different IP address (including (untested) a link-local IPv6 address), or even from IPv4 to IPv6 or vice versa (there is an ipRewrite module that implements the equivalent of NAT64/464XLAT).

Other advantages of Universal Relay over iptables include:

- For DNS, this is worked around by (untested) putting Unbound on the private side that listens on both TCP and UDP and forwards all DNS requests to the upstream server (through Universal Relay) over TCP. Alternatively, for a single host, it is possible to put options use-vc in /etc/resolv.conf.
- For NTP, this is worked around by (untested) putting an NTP server that has 127.127.1.0 (local/undisciplined clock) as a clock source on the private side, but which is on the same host as Universal Relay itself, and provided that the host already has correct time synchronization (it will appear to clients as a stratum 1 server with refid .LOCL.).

The TPROXY redirection is as follows, to be done in the same network namespace as Universal Relay's listening sockets:

Note that this redirection only applies to other network namespaces and physical or virtual clients connected to the namespace through veth or tun/tap devices. It does not apply to the original network namespace itself; you can remove ! -i lo if you'd like, but this could result in potential glitches; if not, then you will have to bind each port number explicitly to intercept connections in the same network namespace as the listening sockets.

Hint for development: The SOCKS server created by the OpenSSH client (when using -D) supports Unix domain sockets on the client side:

(Obviously, if your name is not Sebastian, then you would have to change that path :))